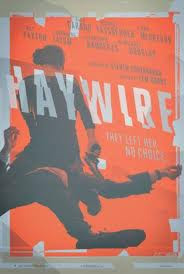 Steven Soderbergh developed Haywire as an excuse to showcase the talents of Gina Carano, a professional mixed martial artist that Soderbergh caught on tv. Boy does it succeed. Carano is a revelation as Mallory, a military contractor and serious asskicker. Her limited acting range matters little when she's viciously beating Michael Fassbinder or Channing Tatum into submission. Indeed, I left wanting to see a whole lot more of Carano.

Read more »
Posted by Cinemecca at 2:37 PM No comments:

Trailer of the Day: Side By Side

Side By Side looks like a great documentary for any film nerd. The debate over Film vs. Digital production has been argued over and over again, but never before in my memory has someone thought to ask the most important figures in modern cinema their thoughts on the subject. And yes, that is Keanu Reeves interviewing them.

Side by Side Official Trailer (2012) from Company Films on Vimeo.

Posted by Cinemecca at 4:25 PM No comments:

Trailer of the Day: Moonrise Kingdom

Love him or hate him, Wes Anderson makes some of the most unique comedies out there. Moonrise Kingdom, his upcoming film, looks to hit all the familiar beats: quirky but lovable story, star-studded cast acting goofy, highly stylized framing, and of course, meticulously selected music.

Posted by Cinemecca at 4:12 PM No comments:

Trailer of the Day: Djinn

Tobe Hooper is probably best known for his 70s classic, Texas Chainsaw Massacre and 80s haunted house masterpiece Poltergeist (though some argue credit for that should go to Steven Spielberg). In his first film in seven years, Hooper returns to the haunted house genre, but changes the setting. Instead of middle America, now it's Middle East. No release has been set, but it's supposedly sometime this year.

Posted by Cinemecca at 4:42 PM No comments:

2011 was a pretty great year for film. In most years, I doubt I'd have much of a problem listing my ten favorite films, but this list took a lot of thought and agonizing. Every single one of these films is a gem, and comes highly recommended.

Read more »
Posted by Cinemecca at 5:33 PM No comments:

Trailer of the Day: Silent House

Elizabeth Olsen was in two Sundance films last year: Martha Marcy May Marlene, and Silent House. Most considered Silent House the lesser of the two films, and it does look like pretty standard fare. However, it has a great actress in Olsen, and an interesting new gimmick: supposedly the whole film was done in one take. There are doubts to whether or not that's actually true, but it sounds interesting either way.

Posted by Cinemecca at 10:20 AM No comments: 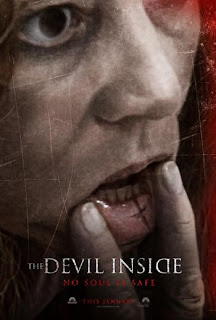 Does the world really need another found footage horror film? The
Devil Inside certainly does nothing to distinguish itself from the
heap of other crappy films that use the same cheesy gimmick. Indeed,
it may be one of the worst of the genre. 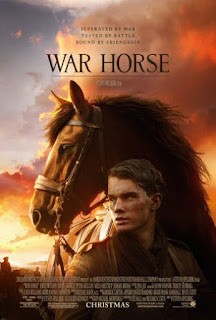 War Horse is the newest Steven Spielberg film—his first since the disastrous fourth Indiana Jones film—and supposedly his return to artistic form, helming a movie based on a book that was a play. The basic plot is that a young boy befriends a horse that is later sold by his father into war and the ensuing bravery the horse, Joey, faces amongst the horrors of World War I and the people he affects.

Read more »
Posted by Cinemecca at 7:47 PM No comments:

Tilda Swinton stars as the mother of a kid who was not right from the start. He grows up until high school and decides to massacre students with his bow and arrow. Jumping between past (where it shows Swinton’s character trying to raise and relate to this clearly disturbed child) and present (where all of the townspeople hate her because she didn’t do anything sooner), you are given an inside look into how an event like this affects the people responsible for raising these kids. The movie isn’t as predictable as you’d think. This features a more sadistic type of killer who’s insane and depraved from the beginning and has a dad (John C. Reilly) who doesn’t seem to notice. The Muppets are a group of puppets Jim Henson popularized in the seventies, with characters like Kermit the Frog and Miss Piggy. The Muppets starred in a string of movies as well as The Muppet Show. After some definitely bad movies of recent years the brand needed fresh blood, but it was a huge surprise when Forgetting Sarah Marshall star Jason Segal approached Disney with a concept to revitalize the Muppets hitting theatres late this year.

Read more »
Posted by Cinemecca at 9:04 AM No comments: