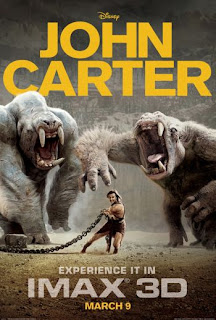 Edgar Rice Burroughs originally started writing his Barsoom books in the early 1900s. Now, a hundred years later we are now being treated to the film adaptation: John Carter. Unfortunately I have not read the books (yet), but if this movie is any indication--they could be a very marketable new franchise for Disney and one with a fantastic and fun concept.


The titular character is a man who is a Civil War vet in the 1800s who comes across a cave full of gold whilst outrunning a pack of Native Americans. Defending himself he kills a robed figure guarding it and is somehow mysteriously transported somewhere: Mars (or Barsoom, as the locals call it). Unbeknownst to him, he’s entered into a feudal world where these large green aliens have taken him captive and a princess is ailing over her forced marriage to an evil war lord. Mars is in need of a hero--could the disillusioned John Carter be that savior?

This is sort of like a mixture between Avatar and Cowboys and Aliens, but tonally is similar to something like Star Wars and Gladiator. It’s a sci-fi/action/adventure film that’s genuinely entertaining to watch. The concept is super fun-- I went into the movie not knowing what to expect and left after having a really good time with the two-hour experience. The screenplay does dabble in questionable moments of poor dialogue and some clichés (do we really need another arena scene?!), but the overall milkshake goes down smooth.

Taylor Kitsch played Gambit in X-Men Origins: Wolverine and if you thought he was the best part of that movie you're in for a treat in John Carter. He’s intoxicating, stunning, and fits the bravado and everyday man’s man that the character needs. He has a whole lot of charm and chemistry with a lot of these green-screened creations and offers a believable take on a new character. Willem Dafoe and Thomas Haden Church also offer supporting voice-actor roles as some of the aliens he deals with and Lynn Collins plays the warrior princess he vies for the affections of.

For a Disney movie, John Carter is actually pretty action-packed and has a level of darkness that’s sort of surprising. There’s a lot of blue bloodshed and violence that’s actually pretty well done for a non-summer blockbuster. The spectacle of Carter wading through alien corpses with a sword is one of the coolest things about the film and something fans of this genre will really appreciate. The 3D aspects of the movie were really neat and made some things look quite gorgeous, but nothing really popped out very much and didn’t aid a whole lot in my experience.

The first thing I thought when the movie finished was that I couldn’t wait for the sequel. I never really say this often, but in the case of John Carter I can make an exception. I really dug the concept and the world that these filmmakers have made (the same director, Andrew Stanton, also made the Pixar film, WALL-E)  and I was very entertained all the way through it. I liked how they tied the movie to Edgar Rice Burroughs and how invigorating the ending was. The trailers definitely don’t do this movie as much justice as it deserves, but it’s the movie that this world needs right now.