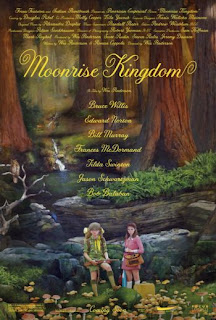 Hipsters unite—the new Wes Anderson movie, Moonrise Kingdom, has just
been released. Being one of those few left who dig Anderson’s films

for their personal relevance aside from just their aesthetic
prettiness, I was eagerly anticipating the film.

Intrigued by the supposed honesty of the script that harkens back to
what Anderson himself felt as a child falling love, I believed this

movie would do a lot to help understand his auteur sensibility. To an
extent, it does just that. However, in the wake of some of his other
key features like The Royal Tenenbaums or The Life Aquatic with Steve
Zissou, it fails to capture the same depth.

Moonrise Kingdom is about two children who fall in love on a large,
isolated island. Their long distance relationship strains them to the
point where they decide to run away together, causing panic across the

island and a massive search party to spread.

Ultimately, the story is about the idealism of love between adults and
children in platonic and non-platonic ways in a restrictive atmosphere
that is more akin to something Shakespeare would have written (if he
were more of a hipster).

Anderson has literally cherry-picked his cast from somewhere between
the Coen Brothers and Martin Scorsese with some heavyweights like
Edward Norton, Bruce Willis, Frances McDormand, Billy Murray, and
Harvey Keitel rounding out the big, bolstering cast. He’s also cast
two young leads as daring as they come and who carry the entire movie
on their shoulders in exciting new ways.

The only detriment to this journey into Anderson’s world is that the
special effects and zany over-the-top moments seem unbelievably forced
into the collective faces of the audience. There is a lot of charm and
brief moments of genuine impassioned love that permeate the film, but
it’s hidden behind some goofy moments that brought me out of the
movie.

It’s one definitely for the Wes Anderson fan in you and has some
moments that will definitely touch you especially if you can remember
the first time you fell in love. The kids are remarkably good at what
they do (awkwardness and all), and the direction makes you feel young
again with them—re-experiencing some of early life’s biggest turmoils
and triumphs.

This is definitely a film not to be missed by fans, but certainly
doesn’t rewrite the book of Anderson as much as I thought it would. At
the end of the day, it’s just another Wes Anderson movie that re-irons
most of the themes that correlate his whole body of work.