The 5 Greatest Classic Kung Fu Movies of all Time 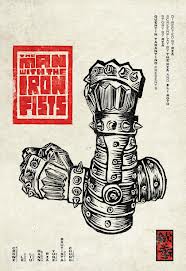 In just a few days, Hip Hop legend and kung fu fanatic The RZA will release his directoral debut, The Man With the Iron Fists. It’s no understatement that RZA wouldn’t be the musician and filmmaker he is without classic Hong Kong kung fu flicks- The Wu-Tang Clan's obsession has been clear from their first album. For those of you looking for some great films to get you ready for The Man With the Iron Fists, I’ve taken the liberty of choosing five classic films that you probably haven’t seen (so no Bruce Lee or Jackie Chan). 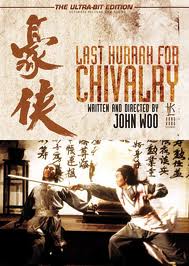 #5
Last Hurrah for Chivalry
John Woo is probably best known to American audiences as the guy who made that movie where John Travolta and Nic Cage face off. Film nerds know him best as the director of the great Hard Boiled and The Killer, or maybe as the guy who is gets hard watching slow-motion doves. Many don’t know that Woo started out making rather generic kung fu films, working with  stars like Jackie Chan and Sammo Hung. Last Hurrah for Chivalry is Woo’s last kung fu film, and one of the few that demonstrate his future potential. The plot, with more double-crossing than an episode of Game of Thrones, is immediately forgettable, but Woo’s eye for action is ever present. Outstanding choreography and classic fight scenes, particularly one with a somnambulist sword-wizard make this a film anyone craving classic action should see. 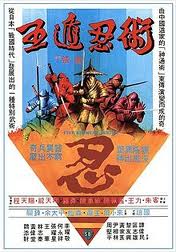 #4
Five Element Ninjas (a.k.a. Chinese Super Ninjas)
There is a whole subcategory of Kung Fu films where bloodthirsty, conniving Japanese ninjas or samurais terrorize the brave Chinese villagers. None of them are quite as batshit as Five Element Ninjas, however. The trailer claims that the film is “A Risult(sic) of Intensive Research,” but somehow that’s hard for me to believe. This is a film where ninjas disguise themselves as trees by wrapping themselves in brown paper. And kill people. One of the campiest films on this list, it is an acquired taste, but this is the best combination of kung fu and insanity you’ll find outside of a Chinese mental asylum. 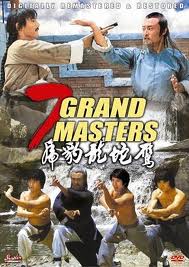 #3
The Seven Grandmasters
An independent kung fu film, this lacked even the meager budget of some of the other films on this list. The tale is beautiful in its simplicity- an elderly master travels China, competing against seven grandmasters of various styles. Along the way, he picks up a new student and faces an old rival. Having written an entire film in five minutes, the crew decided it was time to start working on the fight scenes, and nailed every one. Of particular note is the monkey style grandmaster, and the climatic final battle against the evil Pai Mei (a name that Tarantino “borrowed” when making Kill Bill. 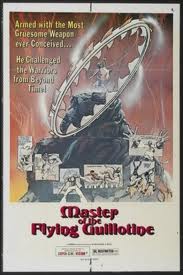 #2
Master of the Flying Guillotine
There is no way to properly explain Master of the Flying Guillotine. It’s a film where the opening scene is a blind man cutting the heads off of chickens with a hat, blowing up his house, and walking away. From that point, he fights in some tournament for revenge or something, facing off against, amongst others, a outrageously stretchy Sihk (who appears to be the inspiration for Street Fighter’s Dhalism) before (SPOILER) being defeated in a shop full of birds, apparently a blind man’s natural enemy. 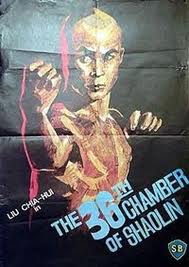 #1
The 36th Chamber of Shaolin
One of the most popular kung fu films of all time, this one still falls off a lot of people’s radar, which is a tragedy because of how damn fun it is. Gordon Liu stars as San Te, a young man who joins a buddhist temple to learn kung fu (in kung fu movies, Buddhist monks get into more fights than that kid in high school that didn’t have a dad). The film focuses less on combat and more on the arduous training and dedication it takes to become a martial artist. Focusing in part on pole techniques, San spends more time playing with wood than a 12-year old boy and a 20-year old sorority sister combined, and the results are even more explosively orgasmic (and with no lingering shame). Not only the greatest martial arts film of all time, this is one of the greatest films ever to come out of China.
Posted by Cinemecca at 9:57 AM